I have been using Windows Vista on my laptop for two solid years. I thought it was about time to dual boot my machine with Windows XP Professional. I find that my battery life and performance has greatly increased compared to Vista. I use my laptop for development, so the first thing I did after dual booting is installed Visual Studio 2005 Team Suite with SP1.

I think a lot of developers in general are not using the full potential that Visual Studio has to offer. There are many free and commercial add-in’s that developers have made that takes Visual Studio 2005 to the next level. The next level that I’m talking about is; the user experience that makes the developer become more productive and at the same time headache free. I will try my best to keep this page updated as I find new add-in’s. 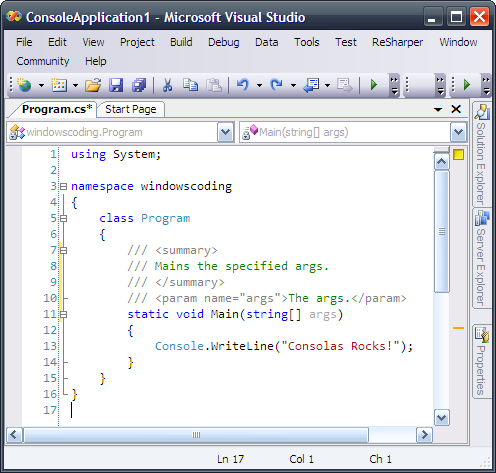 GhostDoc is a free add-in for Visual Studio that automatically generates XML documentation comments for C#. Either by using existing documentation inherited from base classes or implemented interfaces, or by deducing comments from name and type of e.g. methods, properties or parameters (GhostDoc).

GhostDoc is awesome! Anyone can create source code documentation. Using NDoc and a little bit of time, you can easily convert your XML documentation that GhostDoc helped you create, to an awesome MSDN document. 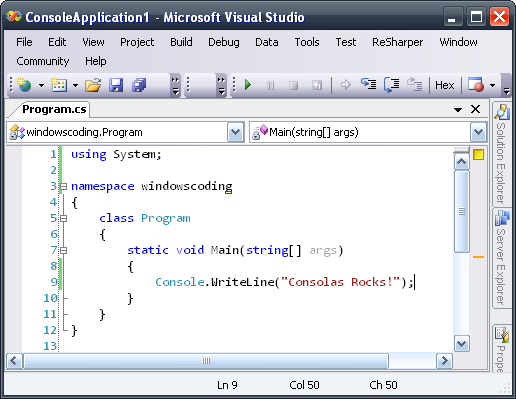 “Consolas is intended for use in programming environments and other circumstances where a monospaced font is specified. All characters have the same width, like old typewriters, making it a good choice for personal and business correspondence. Optimizing the font specifically for ClearType allowed a design with proportions closer to normal text than traditional monospaced fonts like Courier. This allows for more comfortable reading of extended text on-screen” (Microsoft).

Have you ever needed to go into the Windows registry and delete the MRU entries to remove projects that you have deleted or will never use again? Well this is the tool that will do it automatically for you. I have been looking for an add-in like this for a long time. I’m just wondering why Microsoft has not included this in Visual Studio 2005. Who knows, maybe we will see it in Orcas.

CoolCommands that makes it easy for users who want to present their code to others with just a few clicks.Quickly change your font size with a scroll of your mouse wheel.

CoolCommands integrates the Windows Explorer and Command Prompt into Visual Studio. Now you never have to navigate your file system to where your solution exists. CoolCommands also makes it extremely easy to copy project references to another project in the current solution.Overall CoolCommands adds some nice functionality that you will use and will come to appreciate in only a short time.

In the past I have used the free SlickEdit Gadgets, I think their SLOC gadget is pretty cool. I might have to download it and try it out in the future. Recently I downloaded Regionerate, I think that this is a great idea for an add-in, but since they brand the regions, I can go without it. Karthik Hariharan has been really trying to get me to try out CodeRush. From the features of CodeRush that I have been told about, I think that I am definitely going to check it out.

ReSharper “The Most Intelligent Add-In To Visual Studio” 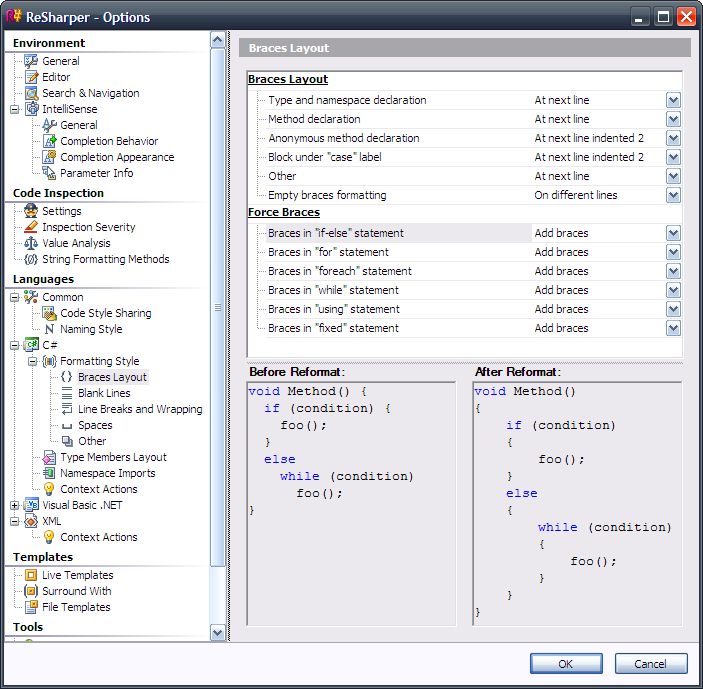 Recently, I was introduced to ReSharper by a friend. This is one of my favorite add-in’s so far. JetBrains coined ReSharper “The most intelligent add-in to Visual Studio”, and I’m going to have to say they are right. This add-in is simply amazing!

To the right is a picture of one section in the Options Page. It has a much better settings layout to customize source code formatting than Visual Studio.

ReSharper optimizes your code. One thing it checks is the using directive for unused directives. With one click they’re obliterated.ReSharper will automatically scan your code for best practices and other common mistakes as well as warn you instantly; saving you from hitting build.If you had to go back and change someone’s code before, then you know how much of a hassle it can be. With ReSharper you can quickly refractor code with ease. “Context Actions” quickly allows you to upgrade existing code to coding best practices. The following paragraph (including pictures) shows one of the reasons I love ReSharper.

Context actions *Context actions are intended for local code transformations that you may want to perform in a certain context. When one or more context actions are available at the current caret position, ReSharper automatically indicates this with the yellow light bulb to the left of the code line. Context actions are applied just like quick-fixes. You can either click the bulb or press Alt + Enter, and then select the desired action.

There are many more features that ReSharper has; you can view the complete feature list here. If ReSharper was a little cheaper, the none could spend less time gathering up their pennies.I would highly recommend to any developer to give ReSharper a chance by downloading and evaluating the 30 day trial.

Get notified of new posts and related content to your inbox. I will never sell you anything and I will NEVER sell your email address.

Blake Niemyjski is a full time open source software architect and private pilot. Since the late 90's, Blake's curiosity has been focused around developing software that helps the masses. As a hobbyist developer turned student and professional, Blake's passion is to further his knowledge and create technologies for the future.

Learn More About Me